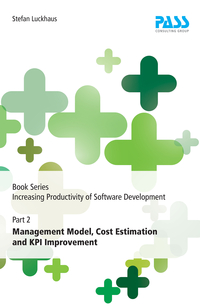 This second part, "Management Model, Effort Calculation and KPI-based Improvement", describes a model based on three key figures: Productivity, costs and quality. It explains its cyclical survey, analytical evaluation and indicators that lead to improvement measures in important areas of influence. In order to be able to assess the benefits of the actions in advance, it provides empirical values as well as a method for calculating their effectiveness. The described model is a navigation instrument that shows the management in which direction and at which speed it moves in view of its key figures.

In software development, productivity is a measure of how much functionality can be developed in a given time and in compliance with defined quality criteria. If productivity can be increased, this enhances the scope of the developed functionality and reduces the time required. Both are desirable, because software is the basis for innovation. IT has changed almost all parts of life through fundamental innovations. Our future will be dominated by virtualization and smart helpers, i.e. things equipped with intelligence. This makes software development one of the key competencies. For software development companies, productivity and time, but also quality, are already critical success factors.

Through the introduction of standards and automation, productivity in software development has been proven to increase 20 times over. When reusing business and technical components, a factor of 100 could already be measured. Such differences in performance can only be traced by measurements and the consequent use of the results as part of a management model designed for continuous optimization.

Stefan Luckhaus is a computer scientist with more than 35 years of experience. He has been working in software development since 1981 and completed his studies 1988 in Frankfurt entitled as Dipl.-Ing. (FH). Subsequently, he was self-employed for 10 years. Since 1998, Stefan Luckhaus is an employee of the PASS Consulting Group. At first he worked as a developer, later he managed development projects leading him to the USA, Singapore, India and some European countries. Today Stefan Luckhaus is responsible for the competence center Project Governance which provides process engineering for software development of the entire PASS group and performs productivity and quality measurements – internally for about 20 IT shops as well as by customers' order. He is a member of the PASS group’s R&D unit and has the status of a Principal Innovation Consultant.

Back to the overview